Named for HRH Prince Phillip The Duke Of Edinburgh, the Princes Hall, Aldershot is a multi purpose centre in Aldershot, Hampshire, owned and managed by Rushmoor Borough Council.

The main auditorium can currently seat 595 in a 'terraced' seating layout or over 800 for a standing concert. An additional 3 function rooms named the Princes Suite, the Edinburgh Suite and the Tichbourne Suite (after the prominent Aldershot family) are available for hire for conference, parties and weddings. 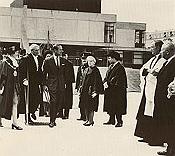 HRH Prince Phillip The Duke Of Edinburgh formally opened the building on Thursday 22nd May 1973. The Princes Hall was originally designed as a civic venue to be used by the council for hosting formal and mayoral events. An unusual design with the main auditorium on the first floor and small meeting rooms beneath created an impressive staircase and entrance. The Princes Hall stands on the corner of Wellington Avenue and Princes Way (formally Barrack Road) originally the site of Warburg Barracks, which then gave its name to the Warburg multi-storey car park, replaced by the Westgate Leisure complex in 2012.

An extensive refurbishment occurred between 1989 and 1990 and bought the Princes Hall into the layout you see today.

The ground floor was extended out under the first floor to create more space, until now these areas had been used for parking and storage; the building appeared to float on concrete piers. The toilets were moved from the first (what is now the foyer bar) to the ground floor and enlarged. The two small rooms were also extended to form the two function rooms; the Princes & Tichbourne Suites. The back stage area was redeveloped from the original caretakers flat, by extending and enlarging to include two workshops, new dressing rooms a back stage area and for the first time a stage door and lift. 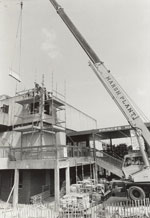 Until this point all set, scenery, props and equipment used in any shows were bought in up through the main entrance, up the main steps at the front of the building.

The Princes Hall was re-opened on 17 th December 1990 by the then Mayor of Rushmoor Cllr AM Ferrier.

For a short period during 1990 the Princes Hall was renamed 'Princes', but due to public demand quickly returned to its original name. 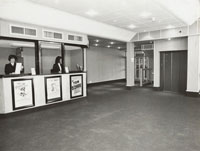 Held nearly every year since the mid 1970's the Princes Hall pantomime has proven to be a hit with all ages young and old. The 2005/06 pantomime 'Sleeping Beauty' broke all Box Office records once again, with its great value family entertainment. The Princes Hall prides itself on producing a pantomime that's magical and enchanting and fun for all ages.

2000 onwards saw many additional improvements including automatic doors, more comfortable and automatic terraced seating, new motorised fly bars over the stage and the redecoration of the auditorium, bar and suites. The Princes Hall has also benefited from an increased programme of events including many famous names, such as Ken Dodd, Jools Holland, Joe Pasquale, Tony Christie and many more. During May 2006 the Princes Hall hosted its first ever ice show, Snow White ON ICE featuring the Russian Ice Stars and over 14 tonnes of crushed ice on the stage.