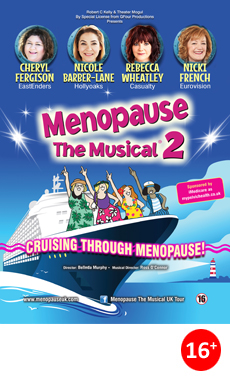 Starring Cheryl Fergison (EastEnders), Nicole Barber-Lane (Hollyoaks), Rebecca Wheatley (Casualty), and Nicki French (Eurovision), it’s our brand-new show, Cruising Through Menopause. In the hysterical sequel to our smash-hit Menopause The Musical®, we fast forward five years to catch up with the same four characters for tales of their lives, loves and losses as they set off on the high seas.

Hot flushes, mood swings, memory lapses, weight gain - these are a few of our favourite menopausal things! Cruising Through Menopause is a hilarious, heartfelt, reassuring and unflinching look at the joys of menopause and friendship. When your life is a bumpy ride full of twists and turns, it’s hard to find true friends. But step on board and we’ll take you on a trip of self-discovery, love and friendship all backed by a soundtrack of brand-new toe-tapping parodied hits!

So, all aboard and we’ll have you laughing, singing and maybe even dancing on-stage, as you join us for Menopause The Musical 2 - Cruising Through Menopause.

Star cast to be announced.