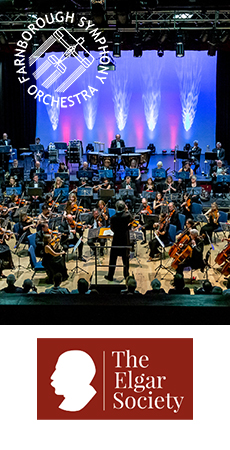 The FSO is concluding its 2022-23 season with a programme of English music. We are particularly excited to be performing Benjamin Britten’s Serenade for Tenor, Horn and Strings with our very own Alison Wyld (FSO Principal Horn) as soloist. Alison pursued a career as a freelance horn player for thirteen years before becoming a primary school teacher and latterly headteacher. She will be joined by tenor soloist, Ruairi Bowen, a finalist in the International Handel Singing Competition in 2020, who is much in demand as an interpreter of Baroque repertoire in the UK and abroad, collaborating with some of the leading conductors in the field. The Serenade is a song cycle on the theme of night, which was written in 1943 and first performed by horn player, Dennis Brain, at whose request the work had been composed, and the tenor, Peter Pears, Britten’s partner.

The programme also includes two works by Elgar and we are extremely grateful for the support of the Elgar Society, whose financial assistance has enabled us to perform this beautiful music. The Froissart Overture was the composer’s first large-scale work for full orchestra and is less well-known than many of his later works. Inspired by the 14th-century chronicles of Jean Froissart, the concert overture contains, in embryonic form, many of the hallmarks that Elgar was to perfect in his mature output. The Enigma Variations was composed some nine years later and needs little introduction as it has become established as one of the composer’s most famous works. Elgar dedicated it “to my friends pictured within”, each variation being a musical sketch of one of his circle of close acquaintances. The ‘enigma’ of the title remains a subject of much speculation, and we warmly invite you to mull over this conundrum while listening to this delightful programme of English music.

Supported by the Elgar Society