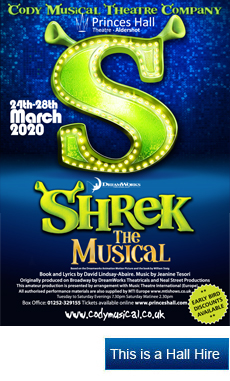 Based on the story and characters from the Oscar-winning DreamWorks Animation film, this hilarious production turns the world of fairy-tales upside down in an all-singing, all-dancing, must-see musical comedy.

Join our unlikely hero Shrek and his loyal steed Donkey as they embark on a quest to rescue the beautiful (if slightly temperamental) Princess Fiona from a fire-breathing, love-sick dragon. Add the diminutive Lord Farquaad, a gang of fairy-tale misfits and a biscuit with attitude, and you’ve got the biggest, brightest musical comedy around!

Featuring all new songs as well as cult Shrek anthem I’m a Believer, Shrek The Musical brings much-loved fairy-tale characters to life in an hilarious all-singing, all-dancing extravaganza, guaranteed to delight audiences of all ages!

Please note that this show is an amateur production.